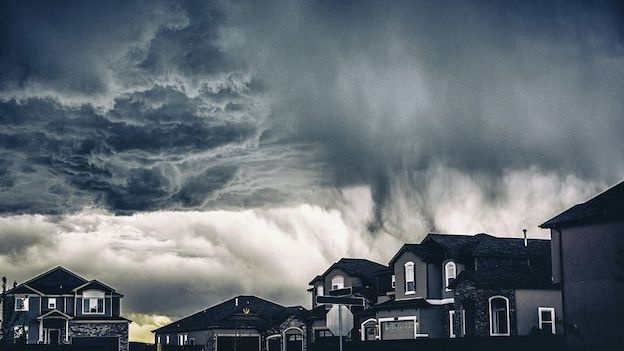 Inflation, Gas Pump Pain, and Putin: How the Turmoil Could Have a Big Impact on Home Prices

Soaring inflation, spiking gas prices, and the war in Ukraine have taken their toll on just about everyone’s bank account balances—as well as their frazzled psyches. We’re already experiencing the worst inflation rates of the 21st century, and now, the round-the-clock bad news is even sparking fears of another looming recession.

The overwhelming uncertainty over what’s coming next has already led to turbulence in the stock market and in investment portfolios, and it has real potential to impact the super-overheated U.S. housing market in a substantial and lasting way. Whether or not prices continue their skyward movement or come back to earth will largely depend on how all of these issues play out.

Rising inflation and gas prices, as well as the U.S. Federal Reserve’s plans to raise rates to tame runaway prices, “are each standalone events that could lead to a recession. And now you have all three of them occurring at once,” says Ali Wolf, chief economist of the building consultancy Zonda.

These challenges are making renting, buying, constructing, and even owning a home more expensive.

“All of the issues we’re continually facing [created] this layer cake of misery. And Putin’s just the icing on top,” says Sean Snaith, director of the Institute for Economic Forecasting at the University of Central Florida in Orlando. “While wages are growing at a fairly rapid pace, the cost of living is rising even faster. Your paycheck can buy fewer things.”

A recession wouldn’t just hurt the economy. It would be likely to wallop the housing market, with the potential to slow down home and rent prices that have leaped to previously unimaginable heights. Rents are up nearly 20% from last year. For homes for sale, median list prices jumped 14.3%, compared to a year ago, in the week ending March 5, according to the most recent Realtor.com® data.

Mortgage rates are also shooting up, increasing buyers’ monthly housing payments, but that doesn’t seem to be reducing sales prices. (Mortgage interest rates reached 3.85% for 30-year, fixed-rate loans in the week ending March 10, according to Freddie Mac. That’s about 80 basis points higher than just a year ago.)

If another financial downturn seems imminent and potential buyers are worried about the stability of their jobs, that could be a game-changer.

“If you’re about to buy a house—the biggest financial commitment you’ll ever make—and you think the economy may head into a recession, that might make you think twice,” says David Sacco, a finance and economics professor at the University of New Haven in Connecticut.

Some experts predict home prices will fall. Others believe they will keep rising

Some housing experts predict that home prices are bound to go down, especially if a recession hits. They argue that the highest inflation in 40-plus years will cut into paychecks and savings. With rents, home prices, and mortgage rates rising, they believe there’s only so much buyers can afford.

But others are not so sure.

“There’s a reasonable likelihood prices could come down, especially in some of the most overheated markets,” says Christopher Mayer, a real estate professor at Columbia Business School in New York City. “People are tapped out, and [home] prices and rents have gone beyond that. They’re already beyond where they should be.”

He doesn’t expect prices will crash in the way they did in the 2000s, unless the nation falls into a nasty recession.

But wealthier buyers may hold off on purchasing second homes, investment properties, or larger residences—particularly as their financial portfolios may have been affected by the stock market’s volatility.

“Investment balances are down for most investors. That alone could make people more cautious in their approach to spending on housing—or anything else,” says Realtor.com®’s chief economist, Danielle Hale. She points out, though, that the stock market hasn’t crashed: It’s still on par with where it was a year ago.

Hale, like many others, believes home prices are more likely to keep rising. That may be especially true in the short term, as buyers attempt to lock in a deal before the costs go up even further, potentially out of their reach.

Zooming out, there are still many more buyers than there are homes available for sale. Builders can’t put them up fast enough to meet demand. During the run-up to the Great Recession, the problem was the opposite, with a glut of new homes. That could mean that prices will continue hitting record heights.

“There are enough people still looking to buy a home today that unless inventory changes substantially, prices are still going to rise at a high single-digit, low double-digit pace,” says Zonda’s Wolf.

Instead of an inventory bump, fewer homes may go up for sale as a result of inflation, gas prices, and stock market volatility.

Sellers, who typically need to buy their next homes, may be reluctant to list their properties and be confronted with similarly lofty prices and soaring rates that will increase their monthly housing payments. In addition, everything involved in a move—from the cost of moving companies (which need to buy gas) to the cost of buying new furniture—is expected to become even more expensive.

New construction and remodeling are likely to become even pricier

Buyers shouldn’t expect builders to come in to save the day. Builders have long struggled to find skilled workers, and global supply-chain problems have more recently created long delays and led to higher prices for the materials used in home construction, as well as for consumer durables, like refrigerators and stoves.

Higher oil prices and geopolitical tensions are expected to increase inflation, shortages, and delays. It will now cost more to transport that lumber to a construction site, and the supply chain could be even further disrupted.

“We can’t get products off of cargo ships and onto rails and onto trucks,” says Snaith. “You see this in these random shortages.”

This means that new home construction is expected to become more expensive still. That alone should keep home prices high.

“I don’t see prices falling, because the cost of construction materials and labor costs are rising,” says Gay Cororaton, a senior economist at the National Association of Realtors®.

The remodeling industry could also take a hit. The costs of those new kitchen cabinets, bathroom tiles, and deck materials have risen at a time when folks are already being squeezed. Many homeowners fund big renovation projects with home equity loans. Those loans are a lot less appealing now that they come with higher interest rates.

“A lot of remodeling is discretionary,” says Realtor.com’s Hale. “As the world opens up, people are spending less time at home. Remodeling isn’t going to be as top of mind.”

Higher prices make it harder to save for a home

Escalating prices everywhere folks turn, from food to housing, are going to make it harder for buyers, particularly first-time buyers, to save up for a down payment and closing costs, and to afford monthly housing payments.

Some will be priced out of the homes and neighborhoods they had their hearts set on, and will move farther out, to more affordable areas, or purchase smaller homes and fixer-uppers. Others grappling with steep rent hikes and ballooning grocery and energy bills won’t be able financially to become homeowners.

Rising gas prices may also play a part in determining where folks choose to live. They may be more reluctant to purchase homes farther away from the bigger cities and their jobs if it’s going to cost more to commute—even if the homes are cheaper.

But those high rents are also likely to push more folks into the for-sale market. Mortgages are relatively fixed monthly costs that can’t be hiked up on the whim of a landlord. Many people are finding that a monthly mortgage payment will be less than what they’re spending on rent. Those additional buyers could offset those who drop out of the market.

Will the U.S. enter into another recession?

The big, flashing question on many minds: Is the U.S. about to go into a recession?

Recessions often follow periods of high inflation and fast-rising gas prices. But experts are divided on what could unfold, particularly as unemployment is very low, and businesses are struggling to find workers to hire.

The country won’t automatically go into a recession just because folks are experiencing some pain at the pump. The outcome depends more on what the U.S. Federal Reserve does next.

“History suggests that a recession is likely, but not certain,” says Mayer, the Columbia professor.

The concern is that if the Federal Reserve raises rates in a bid to tame inflation, it makes it more expensive for companies to borrow money to expand, hire new workers, and purchase equipment. This can slow down the economy, and many fear it could kick start some serious, long-lasting economic pain.

It could also result in higher mortgage rates, because they are influenced by the Fed’s short-term rates.

“The more the Fed has to raise rates, the more those odds [of a recession] go up,” says Bankrate.com’s McBride.

If there is a financial downturn, that doesn’t mean the economy will crash, or that the housing bubble would burst. But it could portend some financial hardship, especially if people lose their jobs.

However, even that may not be enough to halt the housing market in its tracks, especially with such high demand.

“Right now, the fear of not getting a home is more powerful than the uncertainty on the economic landscape,” says Wolf. “If we see this kind of economic volatility lasting for several months, then housing demand will likely slow.”